QUESTION 1.You should spend about 20 minutes on this task.

The diagrams below show the changes that have taken place at Queen Mary Hospital since its construction in 1960.

Summarise the information by selecting and reporting the main features, and make comparisons where relevant. 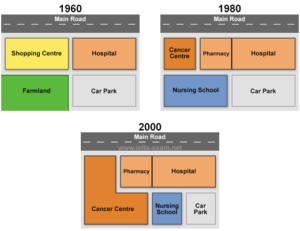 The diagrams show Queen Mary Hospital at three different stages in its development: 1960, 1980 and 2000.

By 1980, the shopping centre had been demolished in order to make way for two additional hospital building which became a pharmacy and a cancer centre. Furthermore, the hospital gained the farmland and converted it into a nursing school.

In 2000, the main hospital building remained unchanged but the cancer centre was extended to cover the entire nursing school. As a result of this, the original car park was divided into two so that it provided a smaller car park and a small nursing school.

During this period, the hospital has increased in size and, in addition to a new nursing school, a cancer centre has been created and extended. Hence the capacity of the car park has been reduced by a half.

QUESTION 2.You should spend about 20 minutes on this task.

Before the facilities were constructed, there was only trees and beach on the island and most of the places were empty. In this island, many new tourists’ facilities have been made including the many accommodation facilities, restaurant, reception centre, pier for boating, swimming facility on the beach. Interestingly plants and trees were not cut to build these constructions and most of the constructions were made near the beach. Beside, Footpaths and roads for automated transportation have been done to facilitate the tourists. The footpaths were made to walk between the residing places and the beach while the motor tracks were created to visit the restaurant, reception area, and pier for boating.

In summary, the construction was mainly made to facilitate the tourists’ stay, visit and amusement and for that, no plants or trees were cut. Furthermore, roads have been made for walking as well as vehicles and the whole contractions seem like has been made with a good planning.

The diagram below shows the typical stages of consumer goods manufacturing, including the process by which information is fed back to earlier stages to enable adjustment.

Write a report for a university lecturer describing the process shown.

The provided flowchart illustrates the process of consumer goods production in an orderly manner and includes various stages of production and sales together with the feedback supplied towards the earlier stages which allows improvements and modifications throughout the process.

The product manufacturing process is initiated with the purchase of raw materials and manufactured components which are kept in storage until the production process is planned. Production planning stage involves product research and design. The process is carried through the stages of assembly, inspection, testing and packaging of the final product sequentially which is then dispatched for sales to the consumers.

In summary, this flowchart illustrates the production process and the feedback provided at various stages of goods manufacturing.

The chart below shows the amount spent on six consumer goods in four European countries.

Write a report for a university lecturer describing the information shown below. Sample Answer
The given bar chart compares the money spent on different consumer goods by the people of four European countries namely Britain, France, Italy and Germany. As is observed from the illustration, British spent more money on those consumer goods while Germans spent the least to buy them.

They spent about 158 thousand on Toys which is a tie with the Italian people. For photographic films, toys and CDs, their spending totalled second highest among the given four nations. Finally, they spent less than 150 thousand on remaining consumer goods. Italian citizens spent around 150 thousand on personal stereos, tennis racquets and CDs while they spent about 5 thousand more on photographic films and toys. Finally, German people spent less in all consumer good items than any other nation and their average spending was 145 thousand which is less than the other nations.

You should spend about 20 minutes on this task.

The diagrams show a structure that is used to generate electricity from wave power.

Summarise the information by selecting and reporting the main features, and make comparisons where relevant. According to the given pictorial, the electricity producing machine works in two ways. Firstly, the structure is placed near a sea so that the wave water gets inside the chamber and creates an air pressure that would rotate the turbine placed inside a column. The rotation of the turbine produces electricity which is stored in the cells and this electricity can be passed and used. The whole structure is placed near the sea, adjacent to a cliff or sea wall.

The second illustration depicts how the electricity can be produced using the ebb tide of the sea. During the ebb, the water gets off from the chamber and the air pressure is created again from the opposite direction and this rotates the turbine. The rotation of the turbine produces electricity and supplies it to the storage.

In summary, the electricity can be produced using a structure near the sea and both the tide and the ebb-tide is used to rotate the turbine to produce the electricity. 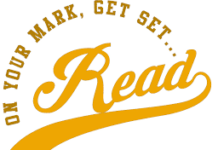 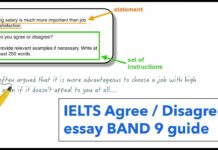